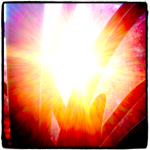 Wrap your mind around this. Believe that, just this moment, someone released blueprints for a free-energy device. They posted them on social networking sites, included them in mass mailers, dictated the instructions on automated phone messages, and hosted them on multiple websites. You have viewed these blueprints and realize that you can generate enough power to fuel your house and vehicle for your lifetime and beyond. The energy is clean and renewable. The cost to build this generator would be less than $100 and you could have it completed in about 2 hours. Almost everyone on the planet has just been exposed to this blueprint.

Believe that this is the truth and ponder the implications of what happens next. What will change in your life immediately? How will society change? How will the power structures shift? How will the creative offerings evolve?

Remember, this is a fact and everyone believes it because they all have the plans. Take a week and immerse yourself in the new reality. After 7 days reflect upon the wisdom that you have acquired and retain the most important epiphanies. Later you will deposit them to your wisdom bank and nurture them indefinitely.

In the next edition I will summarize my mind-wrap experience and launch a new “belief”. In the mean time, enjoy the liberty and wonderment of keeping an open mind.

[Editors note: If you would like to review the overall premise of the Mind Wrap exercises, please revisit the original post here.]

I have thoroughly immersed myself in the daydream that unlimited energy was available to me and every other human on the planet. The device could be constructed by building a small and portable machine. The challenge was to imagine what my life and the world would be like if this technology suddenly existed as an open source offering. Then, I extracted as much wisdom as I could from this wildly imaginative hypothetical. I looked around my home and neighborhood and imagined life with this free energy involved. Here are my imaginings. 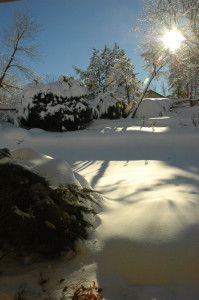 I wake up after a very restful sleep and sit up in bed. My wife is still snoozing so I slide out of bed and look in on the kids before walking downstairs. The dog greets me with a rushed yawn and a quick wag. She is anxious to get outside into the fresh Colorado snow that had fallen overnight. I walk through the kitchen and the sliding glass door into the greenhouse opens with a touch. She pants frustratingly at the humidity and scrambles the 25 feet to the other side. I press an automatic door opener on the wall and a glass, garage-like door slides open a couple feet to let her pass. I can see her through the foggy panes as she tussles in the renewed winter landscape.

I smile as I reach up to pick fresh strawberries from a hanging gutter above. The green vines drape over the edge and pop brightly against the dark ornate woodwork a friend of my parents created for our youngest’s first birthday gift. The name and birth date are intricately carved upon the weathered driftwood from the shore of a northern lake. It hung at the same height as my eldest’s, engraved raised garden bed from not 2 years before. I fill a small bucket and pop a few in my mouth, savoring in the exchange of energy. Weeks ago, a tiny seed became a sprout and wound its way intelligently over the bed of soil to hang a majestic blood red ornament of nourishment … a perfect strawberry, a true miracle to my taste buds on this chilly December morning.

I glance at the fish tank bubbling at my feet, a canal around the periphery of the green house and the plant’s number one water source. Colorado columbine, a native flowering plant lines the edges of the tank in a beautiful rectangle, the only plant in the room that exists simply for the aesthetic appeal. The delicate blue blossoms won’t bloom this time of year but the green leaves pop against the background of the snowy scene outside. The rest of the room is, juice-able, soup-able, salad-able and snack-able. The kids love it in here. It is a spiritual place without any of us ever identifying it as such. It is a balmy sanctuary embedded in the sanctuary that is our neighborhood, embedded in the sanctuary of these mountains, embedded in the sanctuary of our beautiful planet.

I pop another strawberry and stare beyond the hazy greenhouse windows toward the east. Our closest neighbor is a few football fields away. The earth’s population over the past decade has scattered across the land, occupying each corner of the globe in the most unobtrusive and symbiotic manner imaginable. Everyone’s basic needs have been met with self-sustaining personal food sources and self-sustaining shelters. The concept of time-share dwellings has become universal as those who wish to live in other parts of the world are continuously trading homes as they bounce from new environments for new experiences. My neighbor’s house has hosted a variety of unique families and small groups. I believe that they are home now in time for the holiday.

In this new age, scarcity is almost incomprehensible to the young ones. War is a prehistoric notion. The life span is now about 120 years for females and 110 for males. Doctors and scientists pursue their ambitions with pure enjoyment unencumbered by energy costs. All technology is open-sourced. Planned obsolescence seems an ancient, absurd term. There are no more power lines, hi tension lines, underground cables or cell phone towers. Families are bigger yet houses are smaller. Portable energy means diverse meeting halls in the remotest of places for group interaction and entertainment. Robbery has dwindled to nothing as the paradigm of success has shifted from material wealth to inspiring art. Those who create with love in harmony are most highly revered. Those who destroy…well we haven’t heard from them in a very long time.

I was a younger man when the free energy movement began. It swept the globe and armed 7 billion people with a leveraging force that gave them each true sovereignty, independence and self-respect. It could not be stopped. The old power structures crumbled but nobody starved. The old wealthy power brokers were not hunted down and killed or imprisoned. They simply assimilated. It was their only course of action. They did not go quietly though. They tried to start a war. We laugh at the old saying but in reality in the second decade of the new millennium the power brokers started WW3 and literally nobody showed up. The soldiers were building greenhouses and growing their own food; the refugees were heating their own gathering houses to build more free energy devices. The destitute and homeless lived in heated abodes and began to collaborate on growing their own food. There were very few homeless shelters and soup kitchens a few years later. There was no demand. There was less need for outdoor farmland as a two car garage was now a greenhouse. The wilderness came back. Wandering the countryside one could pick wild fruit and berries and gather as they traveled from place to place. Animals and plants thrived alongside humans. The earth became the dream of a young child.

I popped a last strawberry in my mouth and went in to blend up some jam for the family breakfast. The kids are young and have no memory of the “liberation” but they pulse with the frequency of creativity and love all year long because of that one day… the day free energy was reacquired from those who stole it and reintroduced to the world. We celebrate that act every year on their winter solstice. Today is that day and I promise you it is the most wonderful celebration humanity has ever known.