The 15 passenger van was silent as we drove through the downtown area of Rockaways that seemed to be hit the hardest. I saw high water marks six feet up on the inside of the windows in the local tavern. Then an impossibly destroyed car. I'm wondering “how in God's name did that happen?” Then it got worse. One store front: burned. Another storefront: burned. Then it continued, piles of burned rubble like photos of Hiroshima, the water still gushing from the stand pipe sticking out of the ground into the pile of ashes that was once a building.

On the way to our worksite, a woman walked up to see her house for the first time since the storm. She talked about how many years she had lived there. Then she could not say another word.

On another work order from the Rockaway Surf Club that was organizing the cleanup, we visited a woman who was piecing together her family photo album. I felt her loss, but when we approached her and said hello, she was very cheery that another group of volunteers had done the work she needed help with. She was happy and grateful.

The scene reminded me of an epic snow day. All the neighbors, were out with shovels, chatting perhaps the first time even though they have lived next to each other for years. But for this epic storm, it was not snow they were shoveling, it was mostly wet dry wall. The 'wet' and the 'dry’ may seem to cancel each other out, leaving 'wall' but it was far from wall anymore. More like sandy piles of paper mush. And mixed in with that, boilers, furniture, VCR collections, toys and as much rubble as I have ever seen at once. 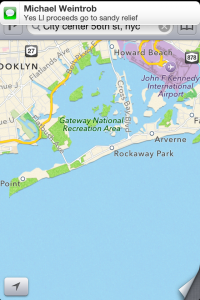 Weintrob texting me about a contemporary dance performance benefit on Sunday night at City Center near Carnegie Hall, earning over $1,300.

When we first arrived for the day, I got my assignment at the Rockaway Surf Club with my team. They needed us at the tower apartments, actually I have no idea where I was but I was starting to wrap my mind around the geography of the thin peninsula that is the Rockaways. We were surrounded by water, and basically the most exposed section of the crook of the Northeast US, that directly faces south perpendicular to the east coast. This is where the northern surge currents hit their first resistance. And no match it was.

I was out at the hydrant filling a water jug for a man on the tenth floor who was blind and only had one foot. He could not navigate the 10 flights of stairs to refresh his water and was trying to eat as little as possible to avoid the situation of not being able to flush his toilet.

On the way back I met Domine, a lovely 77-year old Hatian woman who was proudly making her third trip to the water hydrant from the 21st floor. Seeing her huge bag of water jugs I insistened on helping her up to the 21st floor. It was an amazing experience, the kindness all around us was so powerful and peaceful. She and all the residents we so grateful for all the volunteers. And the volunteers were getting it done.

She taught me some French: "Il fait bien ne jamais per du" (sp?): those who do good will receive good when they need it.

We learned a resident passed away the day before, and that is perhaps why it is getting such attention by the National Guard today. Seeing them power up the stairs was amazing. I felt a tremendous sense of gratitude for those people. God bless them.

When I pulled over to do some mantras with Monica from the Soul Mastery Foundation of NY I felt such a powerful presence, the divine shakti gave me a blast of goosebumps. The saints are present.

Mother Divine unleashed her fury like Maha Kali in a powerful cleansing process. She destroyed much in her path, but sometimes that is what it takes to destroy the negativity in the grand scheme.

I would absolutely highly recommend helping out in any way that you can. They need money so that helps if you go through a trusted organization. Otherwise my best recommendation is to go down there and help in person. It is very organized and everyone is so gracious and grateful. It warms the heart to help people.

If we all just took care of each other instead of always being polarized, I think our problems would be solved.