You are here: Home / Articles / Hurricane DC: Maha Kali as Hurricane Sandy and the election apex

Very interesting times we are in, my friends. The path of destruction of the greatest storm in history has its cross hairs set right on Washington DC as of this post. Here is some context: 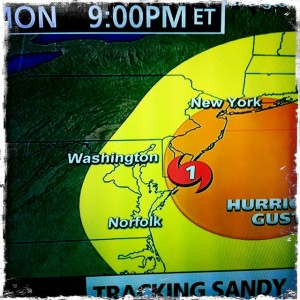 - The Great Recession has been going on for 4+ years solid and people of the world are getting riled up.

- Karma is coming full circle on all sorts of high visibility characters like Jerry Sandusky, Bank of America, Lance Armstrong and everyone seems to be dealing with their demons now more than ever.

- Climate scientists have been warning us for years we are on a path to self-destruction through global warming triggered by carbon emissions. In the US, politicians (mostly in the GOP) continue to deny that climate science holds any water against the bible.

- The presidential election is coming to a head. The debates covered every pertinent issue ad nauseam—except climate change.

- Right as it all comes to climax, the Mother unleashes the greatest storm the Weather Channel has ever seen,

- during a full moon.

When I was visiting Washington DC last October to witness my grandfather, Lt. Col. Gilbert Hostler be put to rest in Arlington National Cemetary, I visited the capitol building. In the core of the capitol building, under the witness of statues of our forefathers, lies this star embedded in the foundation of Washington. This star is the very center of DC, with each hallway extending out in its cardinal direction. This is the centerstone of it all. 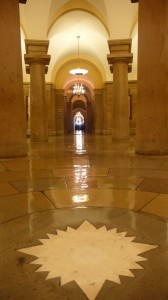 As a practice, I try to pray every day, for the integrity of the forefather to overcome the corruption and destruction that has permeated our republic. I invite you to use this image as a visualization to focus your prayers on, that we may get past our political differences and move forward as a country. We are all in this together.

The Tradition of Maha Kali 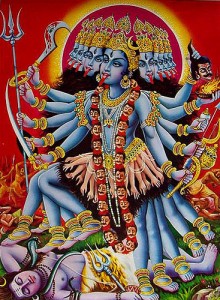 In the ancient tradition, Maha Kali is the fierce form of the mother. She is particularly known from the folklore story when the destructive demon Raktabija started killing so many saints the Gods began to believe that all hope was lost. When Raktabija was struck in battle, every drop of his blood that hit the ground multiplied into more and more demons. As a last resort, the Gods called to Maha Kali to unleash her destructive wrath, to destroy the demon—and take down much in her path in the process.

She cleanses the world of evil, but there is a necessary price for the destructive fury it takes to destroy such evil.

Mother Divine does not always appear in such a violent and vicious form, posturing her many weapon-bearing arms. The Mother most often appears to us as Maya, the illusion that covers the energetic reality of our souls outside this limited 3-dimensional plane. Maya is the beautiful changing trees and gentle babbling brook running through crisp air. She is also the culprit behind you losing your car keys. The Mother is the drama, the ball that comes flying at you that you catch every day and throw back.

The illusion is every detail that prevents you from breathing deeply and realizing the beautiful gifts of reality NOW.

The Mother controls the five elements that make up all of us. Earth, Fire, Water, Air and Sky. In the bigger picture, ‘we are spirits living in a material world’, as Sting said. When your soul came to this planet, it knew the plan and laid out every aspect. But as we enter this world of Maya, we forget our greater purpose as it’s distorted by the illusion, which prevents us from listing to our intuition and greater Brahma consciousness.

And of course Mother Divine is the caring nurturing provider. She “is the very cause of all that was, all that is and everything that will be of existence.” Whether you are talking about Maa Durga or Mother Mary, Mother Divine is widely worshiped all over the world.

The Mother as Hurricane Sandy

Under Swami Sri Kaleshwar, I learned to chant the Maha Kali mantra on the full moon each month at an ancient vedic fire ceremony, known as a Puja to burn off negativity, stress and karma. We collectively pray to the mother Maha Kali to destroy the negativity, knowing that during a full moon the energy is very open and active.

So it is very interesting, this culmination of events that all this is happening right during a full moon. The cycle of creation and destruction continue. The key point to remember is that with destruction, brings a fertile new potential from which a new world will created. As I learned from Buddhist teachings, “with winter, always follows spring.”

So if you are in the path of the storm this week, do your best, prepare for the worst, take care of your neighbors and pray that Maha Kali uses her divine grace to wield her weapons wisely and kill only that which needs to be destroyed. No matter what we think of Washington, or global climate change, or illusion, this hurricane is real so we shall graciously accept what She has for us.