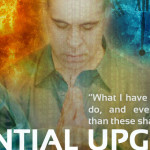 When Mas Sajady came to New York City this summer in June of 2014, everyone knew it was going to be an expansive experience. I remember speaking with Mel Finnerty, founder of Sacred Gatherings and Events who brings some of the most powerful spiritual healers and energy workers in the world to New York City to her events. Mel’s excitement about the imminent arrival of Mas really caught my attention and caught my intrigue, she said he was very powerful—and she was not kidding.

Incidentally, this particular workshop was a fortuitous one to be a part of. In the middle of one of the meditations, Mas received what he describes as an “energetic upgrade”. In the middle of the Seven Deadly Sins workshop, Mas dropped to his knees and dropped into a deep state. Source energy was working on him to bring him up to a new state.

This is the first time an upgrade like this has happened in public, normally it happens in the middle of the night when he’s doing one of his 3 AM meditations. The process is typically the same, he falls to his knees or falls down because he can’t even control what is happening.

Mas explains that when we connect to Pure Source, at those levels it is difficult to control your body because you are so high up into your spirit level that your body starts to disappear. The spirit does not want to be in your body, it is so expansive outside it.

The amount of information coming in during an upgrade is like being plugged into a massive transformer with much higher voltage than you are used to. The energy went out like a sonic boom, going through the room bringing the energy not just to Mas, but everyone in attendance.

He likened the higher realms of consciousness to an upside down pyramid, where the level of information you can access expands the higher you get. Most people on the planet are not even at the very tip in terms of conscious awareness, but Mas continues to go higher and higher with every upgrade.

When Mas came back to life after his second near death experience, he came back to do what no other person on the planet is doing right now. Mas connects with Pure Source in a way that has never happened before in any other realm in any other individual. It is a different process than what was previously on the planet like Jesus or Buddha. It is difficult to describe exactly what that means and is out of scope for a conversation based in physical reality.

In a recent interview with Alan Steinfeld, Mas was asked why he was chosen for this path. “Good question,” said Mas. “This has been my life purpose,” he explained. From his ability to see a more omnipotent perspective of life and the universe, he is able to see that ever since he came into the physical plane as a being human, he wanted to get back to the spirit plane. In past lives he knows that he was around Jesus and was a sage. It has been his life’s purpose for many lifetimes.

With the upgrade comes powerful detoxing

As mentioned in our first Meniscus article about Mas, detoxing is an important part of the healing process. Now after the upgrade, people are detoxing more rapidly, more intensely than before. Because of the more powerful frequencies Mas is bringing down now, it facilitates shifting from A to Z a lot faster.

Even beyond our physical existence, the spirit comes with ideological and habitual baggage like we do on this plane of existence and that is what the detox is—awakening the spirit to its truer form, where you let go of everything to be at that level.

Among other areas of your life, the detox can play out in relationships. If the people around you can not handle the higher vibration you are at, they will disappear from your life. It could be your best friend or your spouse if there is not a good frequency match. However others who are vibrating on a similar level will come into your life.

You will let go of old notions and ideologies, and there will be newer thoughts and people in your life to help you ascend higher.

Mas Sajady came back from two near death experiences to share a gift, a new frequency for those of us who choose to venture towards their higher path. It is not an easy journey, it requires letting go of issues that are too heavy for the higher realms of physical consciousness. But the more people who venture out as pioneers with Mas, to face their issues, and accept the detoxing that comes with it, they will pave the way for the planet to move further towards a kinder, brighter future.

If you are near New York City, you have the opportunity to experience the energy of Mas Sajady in person at the New Life Expo on October 17-20th where you can listen to Mas and other intelligent experts on how we got here and where we are going, and also see if this man can change your life in 30 minutes or less.

If you ask me, I’d vote for yes, with my own life being a testament of a massive transformation since I originally experienced Mas and his upgrade in June of 2014. I invite you to join us to continue the transformation whether joining in person or remotely in NYC next week. Or as Mas says: “Change your frequency, change your life!”