You are here: Home / #awakening / Cultivate a healthy relationship with your phone

After a week long summer vacation off-the-grid I have a fresh new perspective on my cell phone and social media–and I have decided to cultivate a healthy relationship with my phone. Don’t get me wrong, I like Facebook and Instagram and Twitter.. Social media has shown its power to the world when Arab Spring erupted and The People began overthrowing governments based on the power to share information freely. But like anything else, too much of a good thing can be unhealthy, even hazardous to your health.

Power down and live in the moment.

So now that I am back off my digital detox, seeing throngs of New Yorkers glued to their phones everywhere they go, I have made a decision to consciously cultivate a healthy relationship with my phone to avoid being a digital zombie. Here are a few methods:

- Either walk or text, never both. Not only is it annoying, it is dangerous! People get hit by cars! (Same goes for driving, one or the other!) 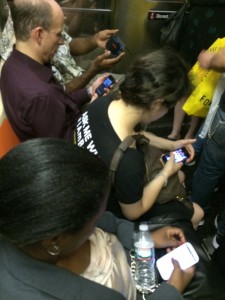 - Don’t mindlessly hit the refresh button in trains, cars and elevators. When you are surrounded by metal, you are inside what is known as a faraday cage. You may have seen cool tricks on the science channel where people stand inside one while effectively getting struck by lightening. They are protected because the metal cage forces all the positively charged ions to repel each outher to the outside of the cage. It also makes it tougher for electromagnetic signals to get through–like your cell signal. When your phone can’t connect, it tries even harder, this blasting you with more electromagnetic radiation, of which the effects may be cancerous tumors and other maladies.

- Don’t carry your cell in your pocket–especially on subways and elevators. To protect yourself against radiation, it is best to keep the phone a distance from your flesh, your organs and especially from your private parts (if you value your fertility that is.) The signal power follows the law of electromagnetic field strength, which is exponential. The power is inversely proportionate to the square of the distance. What that means is even a few inches can reduce the signal strength significantly, although to truly have the “safe” distance, it would be best to carry your phone in a Radio Flyer red wagon behind you.

- Don’t use headphones: ironically those don’t help, they act as antennae to concentrate the signal right into your head. Instead try a Native Union Pop phone which blocks radiation, or other alternatives like the Smart&Safe Hollow Air Tube Hands-free Headset

Most of all, instead of obsessively checking for who across the globe “liked” your post, try being present and talking to the people in the room. I have found the synchronistic in my life have occurred when I am most present.

If you live in New York City, check out Sunset Switch-Off Tuesdays, an event hosted by the W Hotel downtown where guests are encouraged to to power down their phones and live in the moment. (Think about bringing a notebook and a pen in case you meet anyone interesting!)

The Smartphone is an incredible tool if we use it well, full disclosure, I wrote this post on the way home on the train in notepad, haha. I use the camera, the voice recorder, the MP3 player, it has replaced a whole army of devices. But it is also very addictive, so join me in developing a healthy relationship with your phone. It does not need to be always-on.