You are here: Home / #awakening / On Cloud Atlas: Each crime and every kindness 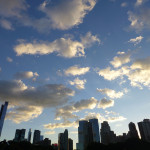 I’m watching Cloud Atlas for the third time now, I have not seen a movie this good in a long long time, so much that I was compelled to write a movie review. Cloud Atlas shows the interplay of dimensions between lifetimes, and the way that our choices—each crime and every kindness—dictate our future fortunes.

You may initially have a “disdain for [the] flashbacks and flash forwards” but it is an elegant story if you pay attention. The dialog is fantastic, and the tale is legendary in every way. The drama involves the battle of a lifetime, of love, of war and peace, and of the pivotal role of music and literature in the shaping of humanity.

The epic seems to include every archetype: the Profit, The Man, oppressed people, the voices in our head that encourage us to do bad things, all tied to a greater purpose and the story of cause and effect. It even includes how the love of a pet can alter the course of empires.

What was most poignant to me was the literature—the artifacts of previous explorers. These stories of courage led each new pioneer, each new revolutionary to the next step of the battle against the accepted structure. One generation after another battled “the natural order to this world” that is society: that must be maintained according to The Man, but must be torn down according to the heroes of change, like Sonmi-451. 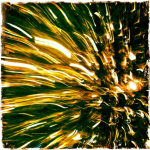 The movie supports the quantum physics theory that time does not exist and that everything happens simultaneously, throughout all our life times. “That to Be is to be perceived, so to know thyself is only possible for the eyes of another.” At the core of quantum physics, the role of the observer makes all the difference in an otherwise strictly predictable, mathematical existence.

A curious character who I do not fully understand was Hugo Weaving’s ghostly character “Old Georgie” in the “106 winters after The Fall” era that tormented Tom Hanks’ character, Zachary. Who was he? The devil on his shoulder? An external entity? The forces of conformity that are preprogrammed in our minds? It is the programming that we are imbibed with that makes us salivate each time we see a new toy we want, watch a football game, are seduced by the newest Prada handbag, the faster car…all the things that we want. This subconscious programming tells us how to behave and perpetuates our patterns.

Perhaps this character Old Georgie represents the programs that convince to go against our instinct and thus create negative ripples in the future. I’m curious to hear what you think.

Overall I was blown away by the movie, I have watched it 3 or 4 times now and every moment of the film reveals new details, layers of the fractyl that are interwoven into this script written, produced and directed by Lana Wachowski, Tom Tykwer and Andy Wachowski originally from the book by David Mitchell. The film was unbelieveable, I highly recommend it to any seeking spirits out there who know there is more to life that heaven or hell at the end of the ride. Death is just a door and we will see each other on the other side.

Cloud Atlas brilliantly illustrates the path of karma, the choices from which the path is paved. How “by each crime and every kindness, we birth our future.”