You are here: Home / Articles / Do something that scares you

After a long transformational journey this summer—another story entirely—I departed for my long-planned mountaineering trip to Rocky Mountain National Park. I have always heard that term “do something that scares you,” when Tony Robbins’ surrogates make commitments to life transformation. I knew this trip to RMNP would be challenging and would require my maximum presence. 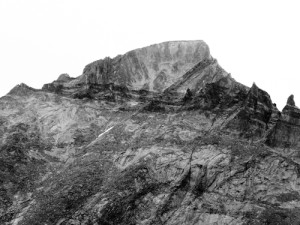 This trip was the next in a long series of ascents Aron Ralston and I have shared over the years. This one in particular to RMNP, was to return to where it all began 20 years ago when we summited Longs Peak, the fourteener that sparked our lifelong passion for mountaineering.

What I love about climbing in the high country is that the mountains are full of life lessons that are taught viscerally and dynamically as one foot is placed in front of the other with your head in the clouds. When you hit altitude, legs and lungs burning, the body wants to stop. That is when the mind pushes on, and when the present moment requires maximum focus.

Going with the flow

Plans for a 2 am departure for Longs Peak were derailed by heavy rain. Knowing this was a possibility we pushed the departure back to a relaxed 7 am, destined for Glacier Gorge around Black Lake between the towering Longs peak to the east and McHenry’s peak to the west. While there was no lightening in the morning we wanted to avoid at all costs getting caught at high altitude without a quick walk off.

From the trailhead we departed with plan B, meaning we didn’t know what the destination was but we’d find out how high in the peaks the weather would allow us to get. No expectations, only discovery and adventure.

We were deep in the clouds all morning, when mist transitioned to rain we donned what was initially a joke but is now the tried and true Mountaineering Umbrella. Not a good tool when electricity or wind are likely but in today’s east coast-style drizzle it was perfect—and hilarious! 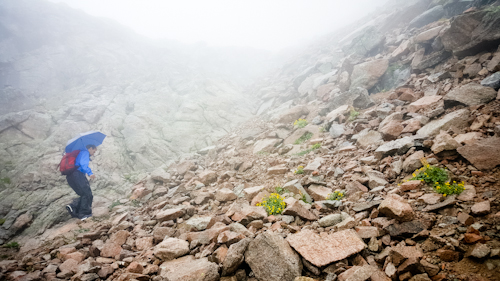 At about 11,000′ altitude and 5 miles into the ascent, Aron and I pulled over to intermit over coconut chocolate Pro Bars. We stopped about 500 feet above Black Lake amid a misty flower-filled run-off. Aron spotted the perfect perch across the stream and I endeavored to join him. The weather had been misting and raining all morning so I approached the rock perch round-aboutly to avoid walking through calf-deep grass that would soak my shoes with dew. 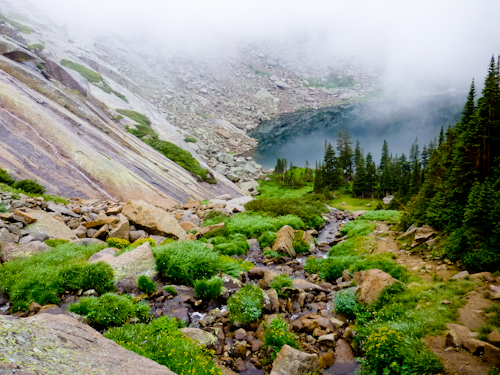 I made my route along some river stones while I patted myself on my back for being clever enough to find such a creative route—until I turned the corner and there was no more route, only running water. I hesitated, looking around at the prospect of getting myself back out of the streambed and seeing only soaking wet options all around me.

How many times does that happen in life? You’re going down a path and all of a sudden you don’t know where to go? Progress hits a standstill. What do you do?

About to give up and backtrack, I took one last step forward onto a small stone protruding just above the glassy meniscus. I looked around the bend and as if the universe was playing a joke on me, a big boulder appeared, previously just out of view when I was in my doubt state.

Where there was no path, a path appeared.

Ahh, I remember. Faith in the flow.

As we continued above tree line, the existing hiking trail came to an end at the base of a tundra marsh on the way towards the boulder field. We did our best to navigate on the wet slabs instead of the marshy grass to preserve what dryness remained in our shoes but at times we had to tally-ho through.

Krummholz is a type of tree that grows just at this subarctic zone that protects itself from the fierce freezing winds by clumping together behind rocks and in large groupings.

You do not want to get caught into a large batch of krummholz! It is a thick quagmire of branches just below the surface of fir needles. You can’t see your feet, there are tons of tripping hazards and you may or may not even be stepping on the ground depending on how deep you are.

As we traverse towards the most amicable route against the steepening ascent, Aron explains his experience once falling through what seemed like the ground, sinking in over his head and splayed in between branches in the darkness. It was a real mess to get out of.

Instead, he said, you have to look for the existing path through the krummholz. The elk and moose thankfully have the sense to cut through the most friendly patches of this knee timber so look for their path instead of forging your own.

Lesson in business and in life: If you can not avoid the krummholz find an existing path through it, else you may be stymied, potentially enough to jeopardize your whole ascent. Do not take such patches—proverbial or otherwise—for granted, they can be a resource-sucking quagmire.

Just as we approached the col, where the ridge line breaks to a steep cliff, the cloud bank began to swirl and lift! After not seeing more than 50 feet all morning against the mist-ical clouds, the craggy arête appears! The fiercely exposed summit of The Spearhead emerges! 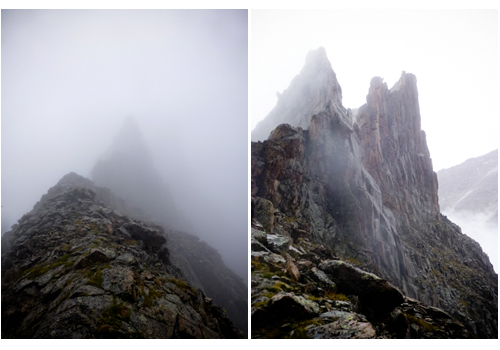 Spearhead emerges from the lifting clouds

The cloud cover swept out of the valley in a swift gust of clear air, seemingly just for us. Now with a window of increased visibility, no rain and the summit in sight, we reflected on the amazing timing of our arrival at the col during the only weather opening all day. I took that as a little wink from the universe.

Having the perspective now of 1000 feet below and 1000 above, I took in the magnitude of the alpine cirque all around me. The sight was totally overwhelming. At that moment I felt a deep fear about the exposure along the summit ridge.

It has been a long time since I’ve been that afraid, but I did not come this far to not attempt the summit—especially after the miraculous parting of the clouds. 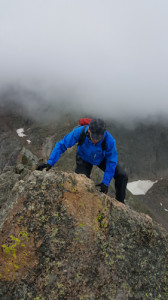 Aron led us onward, careful to point out the safest areas to traverse. Now, at the highest altitude this recent New Yorker had experienced in years, I hit a wall. I could not breathe. I felt nauseous. I vomited. I vowed never to drink dairy-based protein at high altitude. I pressed on.

Arriving at the peak, I see what Aron has been telling me about. The actual peak of Spearhead (12,575’) is what appears to be a pile of queen-bed sized boulders perched precariously above a straight 500 foot drop into the shadow of neighboring Longs Peak (14,259’) and Chiefs Head Peak (13,579’). “Ho-ly shit!” 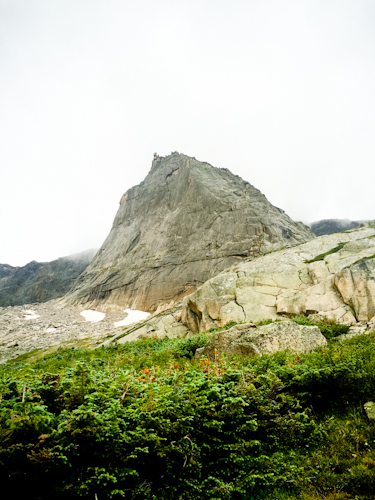 Holding on, we looked over the edge to soak in the marrow of this alpine theatre. It was terrifying and exhilarating. I am a new man. I got what I needed. Hard reset—and a new appreciation for the magnitude of nature and this planet.

The energy at the peak was palpable. Before we left, I sat for a moment in my meditation where I ping love against my wife’s heart from wherever I am. When we do this it sends out ripples of love in every direction. My intention was to broadcast Love her and to Jung’s collective unconscious.

On the trip down I could not stop thinking about how amazing the summit was—but then I remembered it’s not about the past. It’s about right now. 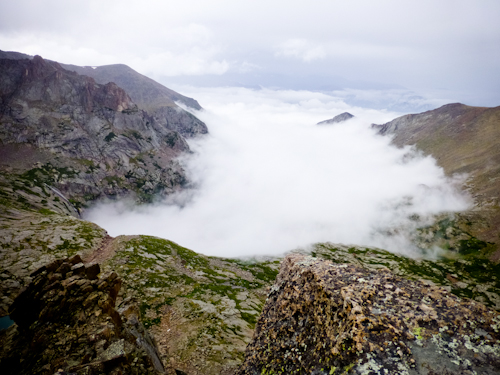 The view from Spearhead and the cloud we had been in all day.

The high altitude puts me into a meditation where my very existence requires every ounce of mindfulness I have. The lack of oxygen, the tricky footwork through the boulder field, the wet, lichen-covered slabs—the path requires all of my energy and I don’t have time for all that mental chatter of life. And that is the point where I find complete silence. That is what I came here looking for: Absolute presence, mindfulness and silence. 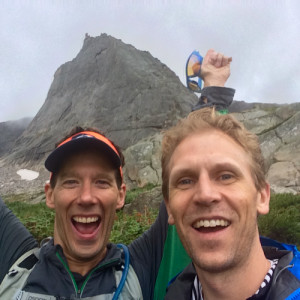 Twenty years ago, when Aron and I first came up to this high country, we had no idea how life changing it would be. Mountaineering is not for everyone, it has to be in your blood. It is grueling, painful and dangerous but if you can stomach one step at a time, you gain the privilege of perspective from the highest peaks and bring those lessons back to life–the powerful practices of ascending, testing our limits, training our mindfulness and sharpening the sword.